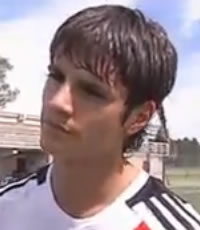 Argentina have unveiled yet another wonderkid in the shape of Erik Lamela who is just 18-years old. The talented youngster almost joined Barcelona at the age of 12 but opted to stay in his home country to play for River Plate. He is now being watched by Manchester City and a host of top European clubs including Juventus, Barcelona and Napoli.

The left footed attacking midfielder, who has been likened to Juan Riquelme is now an established member of the River Plate first team and is renowned for his quality set-piece deliveries. Club sources have clarified he is valued at no less than £20M which Man City will see as an expert piece of business and maybe players such as Carlos Tevez and Pablo Zabaleta could help sway the teenagers’ move?

Lamela has expressed his desire to one day play alongside his idol Lionel Messi at Barcelona and with the transfer window opening in January, he will be undoubtedly be a big transfer target for many. He has now made 10 league appearances this season and last week he set up the winner in a 1-0 victory over arch rivals Boca Juniors. He showed he’s one to watch in the future and hopefully one day we will see him gracing the Champions League but for which club?