Crystal Palace have been a mixed bag so far this season as they just can’t seem to ensure any consistency under Roy Hodgson.

Indeed, the Eagles have lost their last three Premier League outings and remain near the bottom of the table, with major improvements required after the international break. Although, to make matters worse, it’s appears as if Palace were rejected in the summer, as according to L’Equipe (via Sport witness), Emiliano Sala rejected an offer from Crystal Palace back in January. 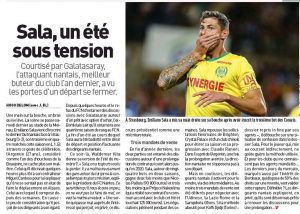 The 27-year-old wanted to join Galatasaray on a loan deal with an option to buy, but the Ligue 1 club refused to enter into negotiations with the Turkish club.

And, negotiations stalled for the week and this is when the Argentine attacker rejected an approach from Crystal Palace in January.

Indeed, the Premier League club are lacking any attacking quality at the pinnacle of the attack, so they would have loved to have Sala at the club right now.

The London club could do with some added attacking firepower at this moment in time due to Christian Benteke’s inconsistencies at the pinnacle of the attack.

So, they’ll be desperate to seek improvements in the near future and could even invest in a striker when January comes around if things haven’t gotten any better.

But, supporters won’t dwell on their side missing out on Sala a while back as their current situation in the Premier League is a more important matter.