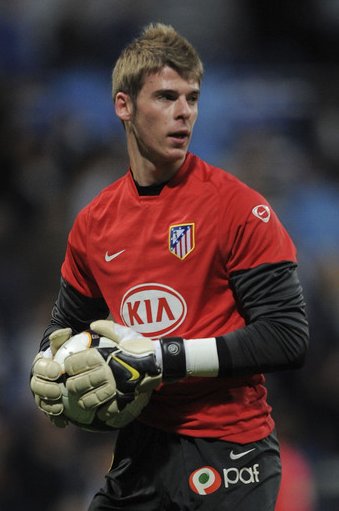 Athletico Madrid’s goalkeeper David De Gea has spoken out of his desire to one day join Manchester United. He could be set to become Dutch legend Edwin Van Der Sar’s replacement who is due to retire at the end of the season.

De Gea is just 20-years old but has already established himself as the clubs’ number one since displacing Sergio Asenjo mid-way through last season. He also helped Athletico win the Europa Cup last season, beating Fulham 2-1 in the final.

He was linked to Old Trafford in March this year and he turned down a premier league move to Wigan but since the likes of Ben Foster and Tomasz Kuszczak have failed to impress Sir Alex, the young Spaniard is hot on his radar.

De Gea has made over 50 appearances for Athletico and has put in some fantastic displays in between the sticks, achieving 17 clean sheets. When asked about a move to United he said:

“I know Sir Alex Ferguson has watched me already. After this season we will look at what happens. I owe Athletico everything and I would love to stay, but on the other hand Manchester United are a great club.”

Can they strike a deal for the talented younster or will they look elsewhere to find Van der Sar’s replacement. Rumours of a possible move for Manuel Neuer of Shalke has also been floating about but one thing is for sure, United will be signing a new goalkeeper soon.

Article title: “I Would love to stay, but on the other hand Manchester United are a Great Club.”