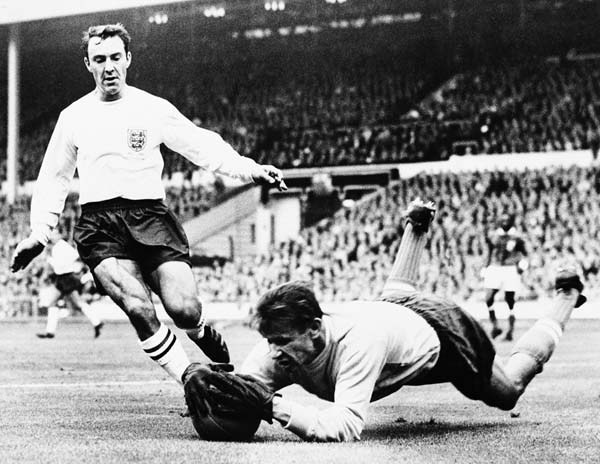 “I was on Sky about my show and two lads with them were talking about Terry. I asked if they’d heard of the Chilcot Inquiry. They went, ‘No’. I told them it was about a guy who took us to war in Iraq. We’ve lost hundreds of soldiers, 100,000 people have been killed and nobody in this country gives a toss.

“John Terry sleeps with some bird and everyone’s up in arms. Yes, he was wrong to do it, and I feel very sorry for his wife, who seems to have been overlooked in all this, but what’s going on? The world’s gone mad.”

To some he was always outspoken, to more he always spoke sense.

Jimmy Greaves’ life was a tale that is still unfolding it seems. JIMMY GREAVES AT SEVENTY is the latest and most complete biography on the greatest goal scorer ever to find the back of the net for Chelsea, Tottenham and England.

Much of the current generation  perhaps know him as a one time legend, one time alcoholic, one time half of Saint & Greavsie. That’s a bit like saying Michaelangelo used to paint a bit.

“Have you ever seen the Stargate films? They go through this brightly lit ring into a parallel world or another dimension. When I came out on to the pitch at White Hart Lane, Wembley or wherever, I became a totally different person to how I was in the dressing room. I knew what I had to do and was confident I could do it. I wasn’t necessarily that assured off the pitch. In a way, when I passed through that tunnel, it wasn’t me any more.”

It is a genuinely limited edition and each one comes with Greavsie’s treasured, hand signed autograph and an introduction by the great man himself.
What makes it different from previous books on Jimmy is that it has a section devoted to the memories and anecdotes of fans lucky enough to have seen him play, and also an in-depth look at his glory-glory years with Tottenham.
It is the latest book out of the classic stable of Norman Giller, author of the excellent Lane of Dreams. He is publishing it in harness with Jimmy’s manager and best pal Terry Baker and Norman’s son Michael, a leading sports statiscian and football historian who as a kid used to sleep in Steve Perryman’s shirt.

The book is being produced as a limited edition, and will be sold on a first come first served basis. If you wish to order one, contact Norman now at greaves70@thelaneofdreams.co.uk

Article title: ‘John Terry Sleeps With Some Bird And Everyone’s Up In Arms’