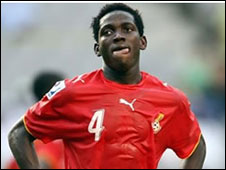 One of the world’s brightest prospects is being tracked by title chasers Chelsea, Manchester United and Tottenham.

Daniel Opare, 2o, of Standard Liege is an attacking right-back who has represented Ghana’s national team and is set to take over John Pantsil as the number one choice. He was a member of Real Madrid Castilla for a couple of years but he failed to impress. He only has one full cap to his name mainly due to injuries but he looks set to become a future star.

His powerful runs down the right is similar to that of Micah Richards as his pace and strength are a couple of his major attributes. All three clubs interested have been linked with other right-backs of late but this youngster is their top target.

They will be hoping to make him a member of their first eleven instantly which shows the lad can play. Liverpool and Arsenal were linked with him a couple of months ago but nothing ever materialised. £8m looks like the target price set by the Belgian club who are struggling to keep him settled.

Opare was a member of the famous Ajax academy where he grew up playing in his teenage years. Chelsea are most in need of a right back I feel as Branislav Ivanovic is more of a centre back and Jose Bosingwa defensively is attrocious. Manchester United have Rafael who is having a great season and now looks to be the established first choice, so they do have a sufficient enough player at present.

Spurs have two decent right-backs in Alan Hutton and Vedran Corluka but they have been strongly linked with Phil Neville at Everton for a while.