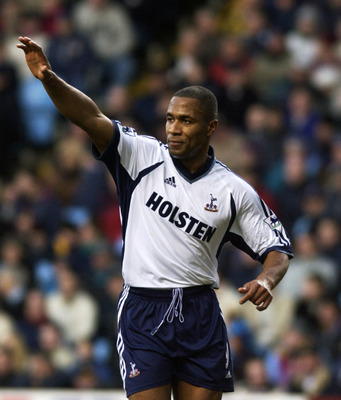 I remember waking up on the day of my first Tottenham match so excited to see my heroes playing. It was 25th November 2000, we were at home to Leicester City and I was 10 years old. By that age I was football crazy already and my whole life evolved around the game so I was literally buzzing at the thought of sitting in White Hart Lane just metres away from the players.

I went along in my blue Holsten away shirt with Sergei Rebrov number eleven on the back and my brother had the man we dread to say, Sol Campbell number twenty-three. He was our captain and as all Tottenham fans know, and it pains me to say this now, but he was the heartbeat of our backline, our captain. There were others like Les Ferdinand, Ian Walker and Darren Anderton otherwise known as”sick note” in the team so for me, this was like heaven watching these play.

Even though now I look back on it, the first half-hour was dreadful, no chances being created and both teams were very lacklustre and looked happy to cancel each other out. I didn’t care, I just remember sitting in the north stand upper in between my mum and brother Sam shouting and trying to sing along to songs i didn’t really know the words to. I have to say my favourite moments were probably booing and jeering Robbie Savage when ever he got the ball. He wasn’t very popular with our fans after he played his part in Justin Edinburgh’s sending off in the Worthington Cup final a few months before.

It must have been about ten minutes before half-time and up stepped the ever-reliable Les Ferdinand to slam home the opener after latching onto a misplaced pass to put us 1-0 up. He was at it again just a few minutes after as he doubled our lead and his tally to make it 2 goals-to-nil at the break with one of his trademark headers.

The second-half kicked off and we were sitting there and the atmosphere was deafening, i’d never experienced such noise before and I was getting goose-bumps just listening to the crowd. Leicester came into the game a little bit more but when captain Gerry Taggart got sent-off for a second bookable offence, we knew the game was all over.

I became more relaxed and settled and Istarted to enjoy the game a lot more, appreciating each pass, I couldn’t take my eyes off the game. Four minutes before the end Les Ferdinand rapped things up and completed his hat-trick.

I also got to see a young Ledley King who was suprisingly fit and not carrying an injury problems at all. I also remember thinking another substitute was going to turn into a Spurs legend. His name was Alton Thelwell. He looked really good and earned rave reviews but it proved that i was completely wrong as the last I heard he had just been released from Leyton Orient after a spell at Hull City after dropping further down the football leagues.

It was a special day for me and looking back at all the changes in line-ups over the years is amazing to see, this day will live with me forever.

Now tell me about yours and COYS!