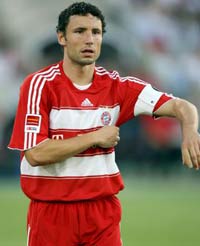 Manchester City and Tottenham are locked in a transfer deadlock over the possible signing of Mark Van Bommel. The Holland and Bayern Munich captain is now 33 years-old but he’s influence in central midfield will certainly help any team in the world.

His tough tackling approach is exactly what Spurs need in their team as we know defensively they tend to leak many goals. Manchester City however are suprising candidates for his signature.

They play with two holding midfielders and they have lots of players capable of playing in that postion. Yaya Toure, Nigel de Jong, Gareth Barry, Vincent Kompany, Patrick Vieira and Pablo Zabaleta. Of course Van Bommel is an outstanding player but they need to focus on maybe a centre-back or a striker or two as they do find goals hard to come by.

PSV are also tracking their former hero who spent 6-years there, making over 220 appearances for the club. With him reaching the final years of his illustrious career he may opt to spend it back home and  finish his career in Eindhoven.

Mark Van Bommel is a top international player who has represented PSV, Barcelona and Bayern Munich so champions league and world cup experience is certainly in his CV. I believe Spurs should look to his experience and disciplined defensive attitude to help them and I see him as the ideal signing to help them progress.

Manchester City on the other hand? I don’t see it happening. I’m not doubting his ability, he will be a regular alongside Toure and de Jong no doubt but they need to look further up the pitch and be more ambitious. Maybe look for an attacking midfielder, they have enough defensive players.

Article title: Spurs Set To Edge It Over City For Dutch Superstar OAP