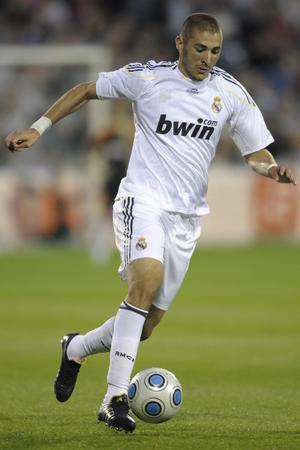 Tottenham’s key victory in Saturday’s North London showdown has reignited Harry Redknapp’s claims that his side could still win the Championship for the first time in Premier League history.

He is now attempting to back this up with a potential loan transfer for Real Madrid’s Karim Benzema.

The French striker has struggled to make his mark in Spain and a loan move could benefit both the player and Spurs who are looking to add to their strike-force with goals hard to come by this term. Benzema averaged just under a goal every two games at Lyon and has been repeatedly linked with Manchester United.

This transfer would reunite him with his old pal Rafael van der Vaart who also struggled to nail down a first team place and we’ve all seen what a revelation he’s been for Spurs. On the other hand, the former Ligue One player of the year has expressed his desire to stay on at the club under the guidance of Jose Mourinho. He is highly regarded by the French national manager Laurent Blanc and he scored against England as well as scoring for Real last night in the 3-0 win at Ajax.

If Harry could mastermind this loan deal, this would certainly boost both their firepower and top four credentials but surely this spells the end for Robbie Keane, or maybe another of the strikers?……