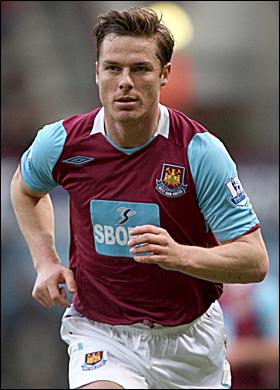 Tottenham have been long admirers of Scott Parker for a while now, primarily since the Harry Redknapp era began. However the Hammers have also been linked with a few Spurs players recently, two of them being Jamie O’Hara and Robbie Keane.

These two could be used as make-way loanees in order to land Parker to fill the defensive midfield position at the Lane. Tottenham as we all know play such attacking flowing football but often get caught out defensively and even with the presence of a fit Tom Huddlestone, he’s still not the combative type of player they need in that position.

For example Wilson Palacios would be perfect, if he could pass 5-yards, tackle without fouling the player and running out of position all the time…..Clearly he’s not up to it. Scott Parket on the other hand, is he good enough?

Plain and simple answer, yes! You think of the attributes needed to fill that position at Spurs and Parker ticks pretty much all the boxes. He gets about the pitch,  and he makes great tackles (one of the best was on Joe Cole as many may remember). He protects his defence and mentally, he’s a strong as anybody around in the game. The player is a leader and allows the more “technically gifted” players such as Luka Modric and VDV to go and express themselves.

Now few of you may now be thinking, he only stands out because West Ham are so poor this year? Charlton Athletic under Curbishley were a decent premier league outfit, Scott Parker was the engine in the team. A £10million move to Chelsea started brightly but didn’t really work out, based on who played his position. Claude Makelele and Michael Essien. Again at Newcastle he was terrific and he’s continued it as he is now West Ham’s captain.

Keane and O’Hara need first team football, that’s a given, so sending them to West Ham is no problem and if it helps that get Scott Parker then why not? He is proven in the premier league and there are few players out there who are “available” that Spurs could sign………..Lassana Diarra from Real Madrid maybe?

Article title: Keane and O’Hara to be used as bait to nail Harry’s top target